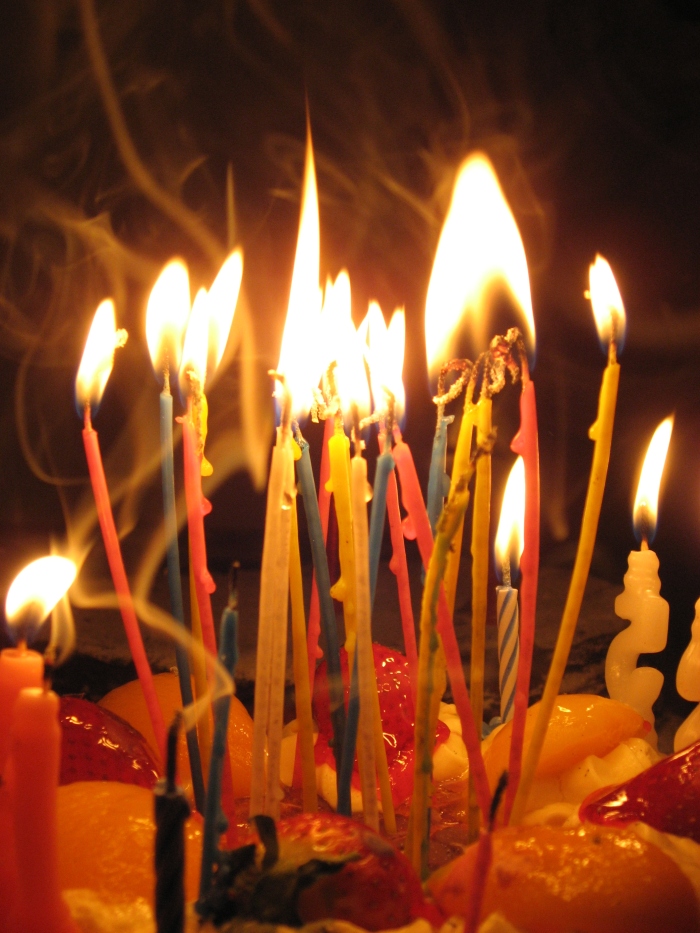 The room’s well lit, colorful. There’s wainscoting and crown moulding and polished brass doorknobs. The hardwoods glisten from the light coming through the windows.

Working on set every day, though, you notice the gaudiness. The colors that only look good on film. The fireplace bricks, oily-looking up close because they’re plastic. The too-bright stage lights that are just bright enough to prove they’re fake.

Just not all the way real.

You feel not fake-fake too as you burst through the door to a cheering live studio audience because your face is flush and your belly’s too big. To cameras all aimed at you, sitting on electrical tape X’s just beyond where the room’s been cut in half. To the director with his script rolled up like a giant cigarette. And you’re like, Goddamn you wish you had a cigarette.

That’s your line. Without the goddamn.

And the crowd laughs and cheers at your catchphrase.

It’s edgy humor. Cigarettes are edgy now and a pregnant lady being that sort of edgy is funny.

In real life people would be appalled. Maybe.

But there’s nothing real about any of this.

Your husband Brian, whose arc this season has turned him into a real dumbass, kicks his way into the living room from across the set. He stands up straight, puts his fists to his hips, gives you a look, and says, “Cigarettes make your hair smell like my Gamgam.”

Cue long pause before next line to let laughter linger.

Then Brian says, “And I’d rather not think of Gamgam while we’re doing it. Even though you’re totally as big as she is now.”

You’re staring, thinking, Jesus how can these writers sleep at night after writing this stuff. Thinking, Oh shit I have something I’m supposed to say. Thinking, you’ll ask to be written off. You’ll die in childbirth. They’ll make it funny.

You exaggerate an eye roll, use your head, play up the body language. Then you say, “Gamgam’s dead.”

“Remember? We told her we were pregnant at her ninetieth birthday party? An embolism burst in her brain? She went face-first into ninety lit birthday candles and set her blue wig on fire?”

Brian waits for the crowd to settle.

Cue contraption strapped to your crotch being remotely set off to soak your elastic waist-banded jeans.

Cue Brian telling you you peed yourself, his face all wrinkled-sick.

Then you cringe because you know you have the worst line that’s ever been written for you. Edgy humor your ass. What ever happened to subtlety? To privacy. To modesty. To your body being a vessel for your particular brand of comedy instead of a thing that went from size zero to preggers over the break in the shooting schedule to get people watching again.

Your face goes red before you say it, and when you say it you can almost taste it. “Just wait until I’m in the stirrups. I’ve been constipated for three days.”

Brian sells it. Looks confused. As if he hadn’t read the script at all. As if he doesn’t know that all the jokes in the delivery room scene are about nipples, or vaginas, or buttholes. Because really, everything’ll be hanging out and up for grabs. And everybody’ll be poking and prodding. And Brian’ll pass out on a big foam mat and get a big laugh while you have to scream and curse and make jokes about shitting yourself in front of an audience.

That’s what you’re supposed to do.

Be a good sport. Don’t be difficult. You don’t want to be one of those actresses.

Brian’ll never have the pleasure of having a room full of people pretend to stare up into him. He’ll never know what it’s like to be made into a waddling, gassy, nine-episode joke to make the studio execs all happy during Sweeps Week.

You know what it’s taken to get here. You followed everybody’s advice. Did everything right. Eked out your own corner of network television.

Then the ratings drop, the writers quit, the critics get flat-out mean, and you have to compromise to keep this thing going. Whatever this thing is anymore.

They barely use the bedroom set anymore.

Then the laughter ends.

Brian says his line about poo-poo and hoo-hahs and gags a little, puts his hands on his knees saying oh god, oh god, he’s not ready for this. And that’s when you have to make your way across the set in wet-crotched pants to rub his back.

“It’s okay,” you say. “After all of it we’ll come home with our little baby. That’s like a dream come true, right?”

Brian stands, wraps his arms around your enormous body, and kisses you right on the lips.

The audience belts out a big, genuine aw-sound.

When Brian pulls away from you he smiles, says, “We’re having a baby.”

“We’re having a baby,” he says again, yanking the end of the sentence up into a question.

Cut to your close-up after Brain’s collapse.

“Does this mean I’m driving?”

Everybody knows what adding a baby to a show about a fun couple having sex and getting caught and failing to be adults means.

Rent the shark. Get the crew to build a ramp. Hire a stunt cyclist.

But it’s a way to get people paying attention again after you run out of things for two people to do all cute and funny.

You’ll get another season.

Maybe three if Brian’s drunken, deadbeat sister is upgraded from recurring to regular.

But after that it’ll be over.

The set that looks like a really nice place to live from the audience seats will be dismantled. The crew will be assigned to other shows almost identical to this one. Brian will probably never work again because he won’t want to play stupid anymore. And once you pull this Velcro baby suit off you can do shampoo commercials and prepare for cancelation.

You’ll move on. Maybe to a soap for a while.

Then more than likely you’ll age out of all the good roles.

And, if you’re lucky, you’ll get a spot on a daytime talk show that gets ignored most days and mocked on late night TV every now and then.

But for now, before the director yells cut and you have to hump it over to the hospital set to be sprayed down and draped in a paper gown, there’s a smiling, cheering audience who thinks you’re great.

They’re so happy for your character.

Everyone loves a baby.

For a little while you’ll be fine with Brian and everything’ll be new and funny again.

And really, in this business there’s not much else you could ask for.

Nick Gregorio lives, writes, and teaches just outside of Philadelphia. His fiction has appeared in Crack the Spine, Hypertrophic Literary, 805 Literary and Arts Journal and many more. He is a contributing editor for the arts and culture blog, Spectrum Culture. He earned his MFA from Arcadia University in May 2015 and has fiction forthcoming in Zeit|Haus. His debut novel, Good Grief, is expected to be released in 2017 by Maudlin House. For more, please visit: http://www.nickgregorio.com