Flash fiction by Michael A. Ferro 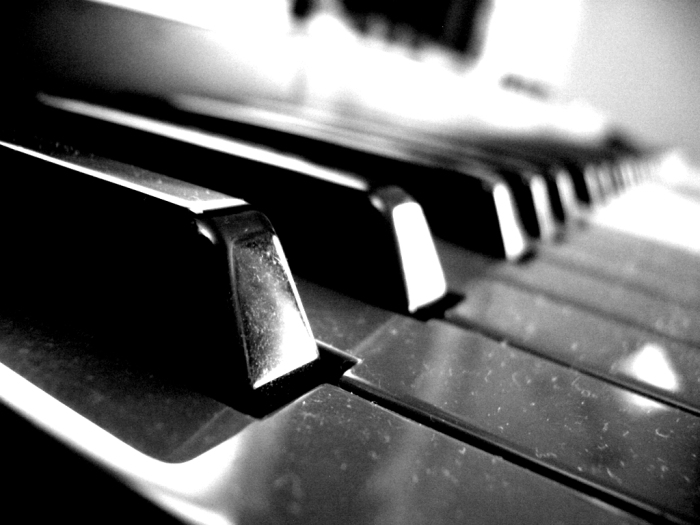 She hits the E1 key hard with her chapped finger and the thin ivory plate pops free from the wooden base and falls to the floor. Her finger is still pressed against the key as she listens to the note resonate around the small room. It’s her favorite key. Something about E1 is serendipitous. The sound can signal the start of something just over the horizon or a chapter drawing to a close—the fortune of both inception and finality.

After the note has slipped away into the cracks throughout the walls around her, she leans over on the broken dining room chair and picks up the small plate of ivory that had covered the key. Might be worth something, she thinks; can’t believe no one else pulled it already. Then again, when people come scavenging they most often head into the kitchens and basements looking for the copper. An antique upright piano sitting old and broken with the front case shield long gone and the dusty old mallets and strings exposed rarely catches a second glance in these derelict homes. She noticed it two nights ago but dared not touch it. Only when she convinced herself that she would stay another night or two in the house did she strike that note.

She stands up and takes a step back, slipping the ivory into her pocket and looks at the massive instrument. It leans toward one side where a wooden leg is splintered. The piano looks like the crooked shadow of a man resting on a cane. Most of the other ivory pieces are gone, but there’s still a few left. She walks back to her seat at the piano.

Motown. Just one of this city’s gifts to the world. She loved Motown music as a child. Her mother bargained for her to take lessons from the hoary guy down the street. He taught her the R&B riffs of Motown, but eventually had her playing Schumann and Schubert, whom she called “Sherbet,” and he would grin all back when dad was still at home and mom had her sense.

She put her hands onto the keys in perfect arrangement. The old man used to smack her fingers with a ruler if she did this wrong. As she began to play “Ave Maria” she could hear that the piano was drastically out of tune and a few of the keys were dead and gone, mute to the touch, but it didn’t matter. She had not heard this piece of music in years and when she played now the tone was off and the harmony was littered with dead, noiseless notes. Her fingers played softly but they were steady, though her heart skipped a beat or two.

Nothing had ever sounded so beautiful before and after she finished the song, she pulled the broken cover back over the keys and dried her eyes. All through the night she heard “Ave Maria” and felt the E1 note reverberate deep within her chest.

Born and bred in Detroit, Michael A. Ferro was awarded the Jim Cash Creative Writing Award for Fiction and received a degree in Creative Writing from Michigan State University. His fiction has appeared in Chicago Literati, Viewfinder Literary Magazine, Points in Case, and is forthcoming in The Corvus Review. Additional writing can be found in various outlets online through his website: www.michaelaferro.com. After traveling, working, and writing throughout the Midwest, Michael currently resides in rural Ann Arbor, Michigan.